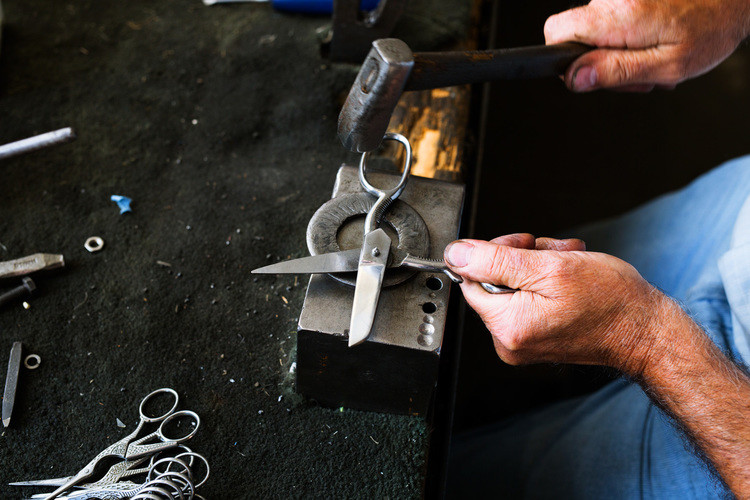 We have a very special announcement this month. Ernest Wright is back with a new vitality. Paul Jacobs and Jan Bart Fanoy of Rotterdam recently purchased the company and gave the famous scissor-maker a new beginning; with capital, new equipment, and a fresh vision of the future with a dedication to preserving the past. This hand-made enthusiasm is a perfect fit for Olde Towne Cutlery, and we are proud to have this line back in stock. As they get production tuned-up, more patterns will be returning. But for now, we have the three most popular items in stock; The Turton, the dressmaker, and the stork. 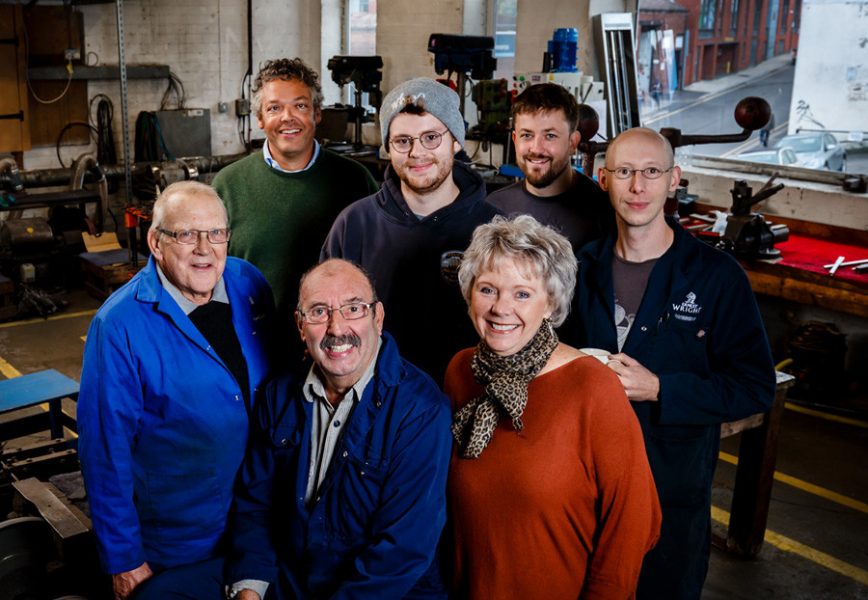 The following is a quote from new owner Paul Jacobs, which I believe perfectly describes our feelings about hand-made cutlery.

“I am fanatical about high-quality and handmade products. My kitchen is full of hand forged knives and I also support a shoemaker’s workshop near my home in Rotterdam. When you own something that’s handmade, it has a different feeling. You’re aware of the hours and effort that have gone into production and the years of skill and experience that make it possible.”     Paul Jacobs

In addition to the article below, you MUST watch The Putter; which has been a social media viral sensation.

The following is a history of the Ernest Wright Company from the company website: https://www.ernestwright.co.uk/history/

The Wright family have been involved in the boring, hardening and tempering of scissors since at least the 1800’s. As far back as records go, Walter Wright – a renowned ‘Little Mester’ of Sheffield – specialized in finishing scissor blades as an outworker and was also referred to as ‘Master Scissor Putter-togetherer’.

A scissor putter-togetherer is the proud title given to the holder of a five-year-to-fully-apprenticed skill set and trade, known and still used by our craftsmen today. 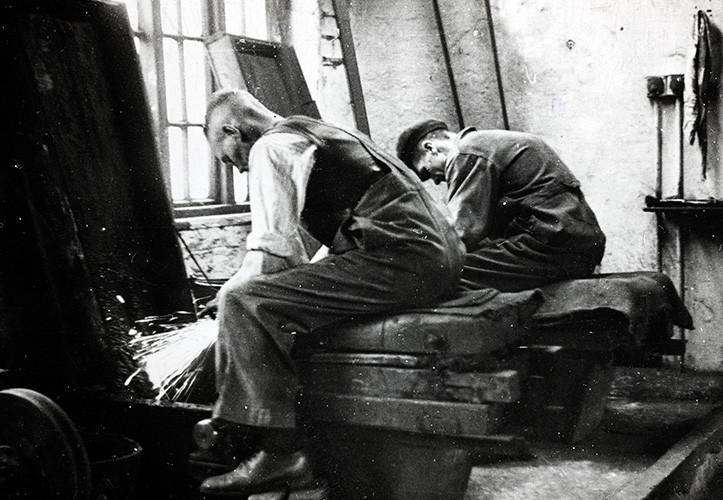 Since Walter Wright moved into the scissors industry, successive generations have joined the trade. Walter’s son, Ernest, followed in his father’s footsteps to ultimately found the company in 1902. After him, Ernest Wright junior and his sons Graham and Philip Wright all took their turn in running this family business. Finally, fifth generation scissor maker Nick Wright stepped in, until his untimely passing in 2018.

Although not a family operated business anymore, its new owners are fully committed to keeping the Wright-heritage alive. It’s their ambition to prove Ernest Wright is not a museum of a disappearing craft, but a vivid company that produces the finest quality of scissors by hand for a discerning, worldwide audience. 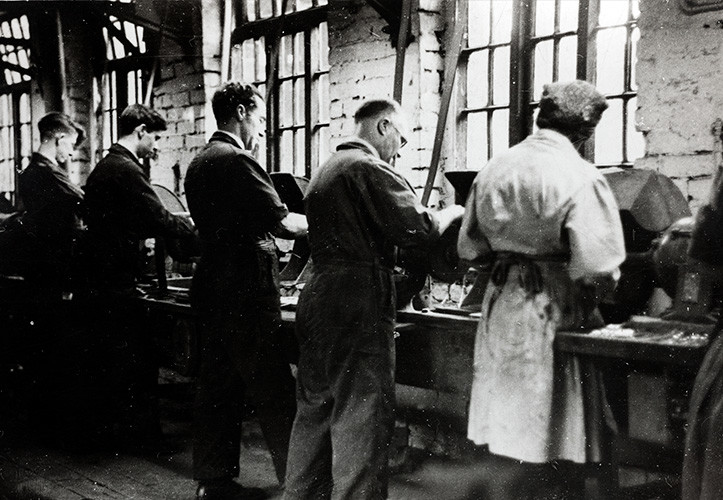 THE FIRST HALF OF THE 19th CENTURY

During the first five decades of the century, the company grew steadily, forcing it to move to yet another location, this time on Talbot street.

The arrival of the Second World War meant a slight detour, where we produced surgical equipment in order to avoid merging with a larger company. But by the end of the war, cutlery was in such high demand that the stage was set for the boom that the company experienced in the post-war era.

From the 1950’s right up to the 1970’s, Ernest Wright and Son Ltd. continued to thrive. The new Kutrite trade name was introduced in 1954 and set the brand apart from its competitors.

Through growth and acquisition, the company rose to become a formidable force in both UK and world-wide scissors and tool production and supply.

Employing over eighty workers and exporting to forty-five different countries by 1977, Ernest Wright and Son was one of the largest scissor manufacturers in Great Britain. In the year of the company’s 75th anniversary, Ernest Wright Jr. retired and left the company to his sons Graham and Philip. 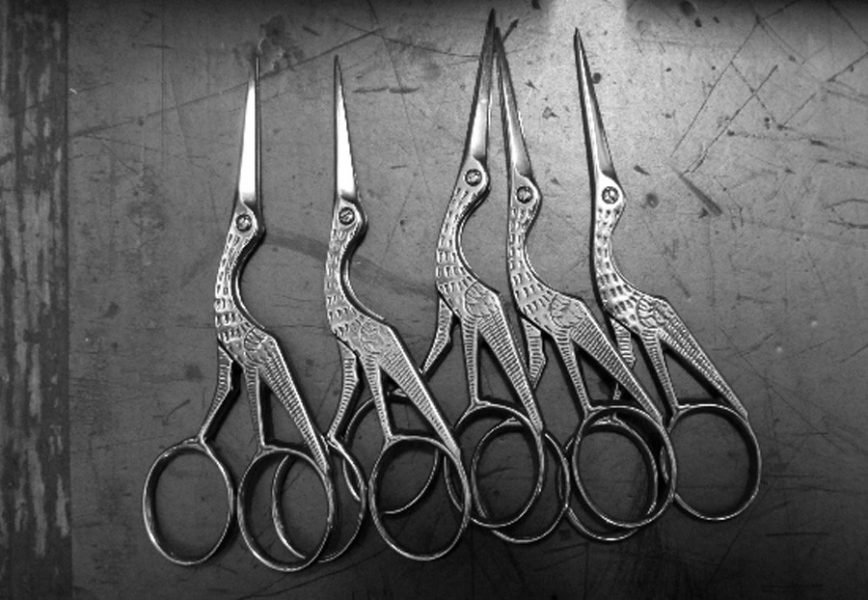 Right about the time Graham and Philip took over, globalization set in. Fueled by an economic crisis we saw production move elsewhere, mostly to Asia. Throwaway became a popular term. People liked this new cheap replaceability of goods. Traditional and Made in Sheffield became rather untrendy.

Where once 40,000 workers were employed in the Sheffield cutlery sector, with about 70 scissor-making companies alone, there were just two left by 1990. And both were a shadow of their former selves.

In 1988, Ernest Wright and Son Ltd went into receivership, only saved by a distant relative stepping in.

Philip Wright managed to take over the business again in the 1990’s and ran it into the millennium. Relying solely on outwork from larger local businesses, now the company was called Kutrite of Sheffield.

In 2008, Philip’s son Nick joined forces and took over the company in 2012. Nearly going into receivership again, the documentary “The Putter” went viral in June 2014. It reached almost a million views, mostly in the United States, and orders poured in immediately. On top of that, the BBC put a wonderful portrait of another one of our Putters on their international homepage. It rallied half a years’ worth of orders, something that hadn’t happened in quite a while!

Then there was the hugely successful Kickstarter campaign to fund the development of an improved version of the famous 1962 Kutrite-model. But it was not to be. 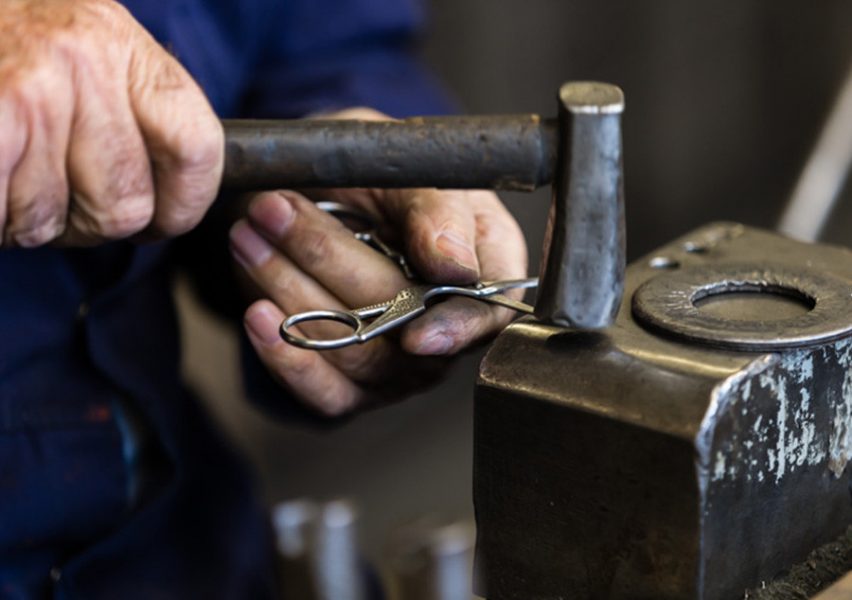 After several setbacks, the Kutrite-project came to a standstill. Both our master-putters fell ill for over 8 months and the new blanks had some major issues. But nobody was prepared for the untimely demise of Nick Wright, in the midst of his efforts to renovate the machinery and deliver all orders in time. Ernest Wright and Son Ltd. went into receivership once more.

Paul Jacobs and Jan Bart Fanoy, two Kickstarter-backers, could simply not accept the fact that after 116 years, the art of scissor-making was on the verge of disappearing from Sheffield. They took action and bought all assets from the Receiver with the single objective to rescue a great brand, product and heritage. Among the first things they did was to re-hire Eric and Cliff, the remaining master putters and take on Sam Clark, a new apprentice. Former employee Pam Addy came back and Peter van Mameren was put in charge of running the factory.

Olde Towne Cutlery is extremely proud to represent the work of these amazing people. We thank the Ernest Wright family for keeping the brand and craft alive!